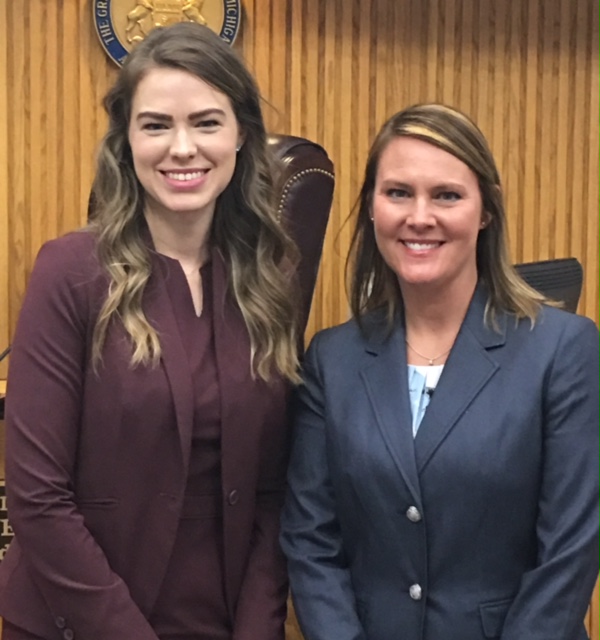 Zahner is a familiar face in the county courthouse as she prosecuted domestic violence cases in Charlevoix County from 2008 through 2013, first as a special assistant attorney general, then as a special prosecuting attorney.

She was previously an assistant prosecutor in Charlevoix County from 1999 through 2004 and worked in the office again in 2013 and 2014. Most recently, she served as attorney magistrate in the 90th District Court.

Borchard comes to northern Michigan from Saginaw County where she has served as an assistant prosecuting attorney since 2012. She was one of two prosecutors who handled criminal sexual conduct cases in that county.

“We are very fortunate to have these fine, experienced attorneys join the office,” Telgenhof said. “Whenever you have a vacancy, you are concerned about finding the right people, but these two are perfect fits for the office. They are both more than able to hit the ground running.”

“Kerry has a wealth of experience prosecuting domestic violence cases and really being a leader in northern Michigan in that capacity. Caitlin has been trying cases in one of our state’s larger counties so she will make the transition very easily.”

Borchard grew up in the Saginaw area and graduated from Alma College and the Michigan State University Law School in 2011. She was an extern for Michigan Supreme Court Justice Maura Corrigan while in law school.

Allen Telgenhof is the Charlevoix County Prosecuting Attorney; he has been an attorney since 1989 and a high school baseball coach since 2005. Graduated from Clio High School, Michigan State University and Thomas M. Cooley Law School. Proud father of Ty, Ally, Will and Luke and husband to Erin.
View all posts by Allen Telgenhof →
This entry was posted in Uncategorized. Bookmark the permalink.